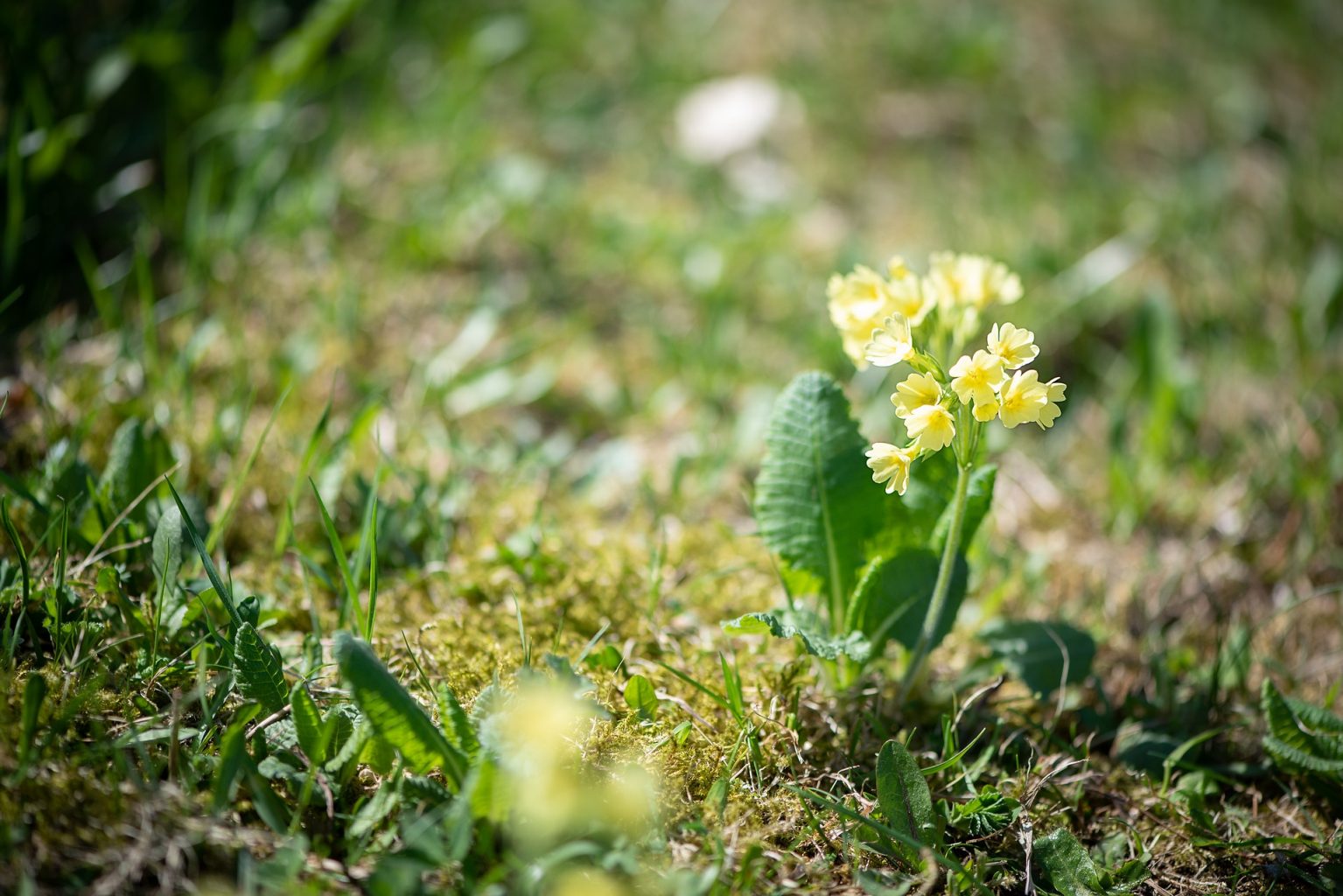 is widespread nationwide, but prefers calcareous soils. The plant is on the Red List of the federal states as a critically endangered species, especially in northern Germany. 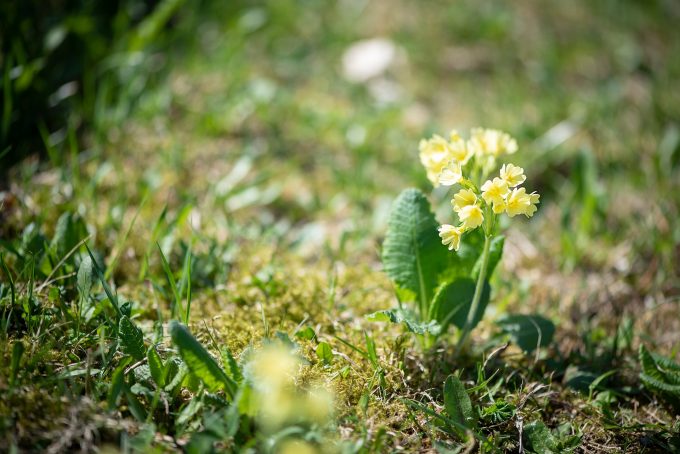 Meadow cowslips like lean and dry, semi-open or open landscapes. They are pollinated by many insects: butterflies, bumblebees and various types of flies. They reach a height of 20cm and bloom from March to May.

The species is under protection nationwide and may not be dug up or picked in the wild.

one on Niederrhein occurring gentian species.

Lung gentian is a 40cm high perennial herb that flowers from July to September. The plant needs sufficient moisture and a sunny location, because only at 19 ° C do the flowers begin to open, which have fully blossomed at around 25 ° C.

The little moor blue (Maculinea alcon) then only lays its eggs on the flowers of strong plants. 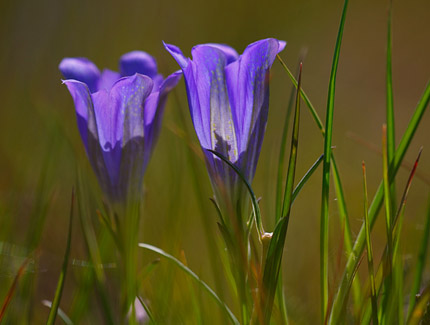 Lung gentian and the animal species associated with it can be promoted by sufficiently large and stable stocks. A measure can be the targeted scattering of seeds on prepared locations in the immediate vicinity.

In the Dingdener Heide this was practiced with good success on a test area.

Small and carnivorous: the round-leaved sundew is considered a survivor that adapts to poor locations and has developed a special strategy to get essential nutrients. He is in moors and Heiden to find.

The small, herbaceous plant is about 5 - 20cm high. Their leaves are arranged in a circular shape. About 200 fine, red tentacles are located on the rounded catch leaves. you scheiden a sticky secretion that serves solely to attract small insects. The leaf then curls up and digests the insect. The inflorescence of the sundew consists of individual flowers that only open when there is sufficient sunshine. Its name refers to the drops of secretion on the edges of the leaves that glisten like dewdrops in the sun. 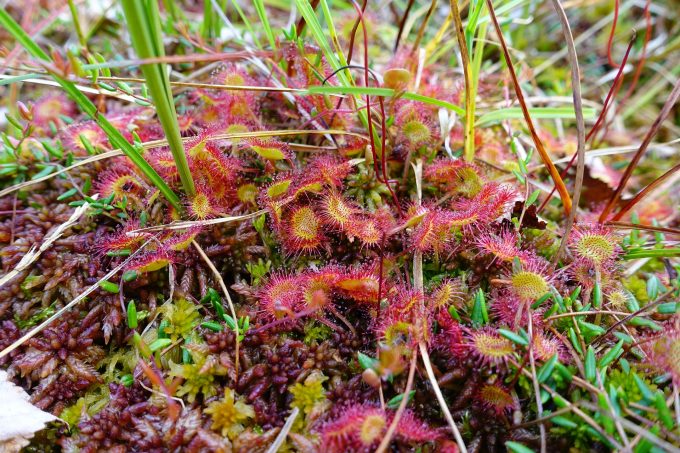 Suitable habitats for sundew are threatened by drainage and peat extraction. The decline is to be slowed with various renaturation measures. The sundew species are considered endangered.

The common cranberry is a representative of the blueberry and belongs to the heather family. It is edible, very rich and a local fruit. Oxycoccos, the second part of its name, is derived from the Greek oxys (sour) and kokkos (berry). Which indicates the taste of the berries. The evergreen dwarf shrub is only two to six centimeters high, with stems that can crawl up to a meter. Its leaves are leathery, dark green on top and whitish green on the underside. During the flowering period from May to August, pink flowers sit on peduncles up to five centimeters long. The fruits ripen from August. 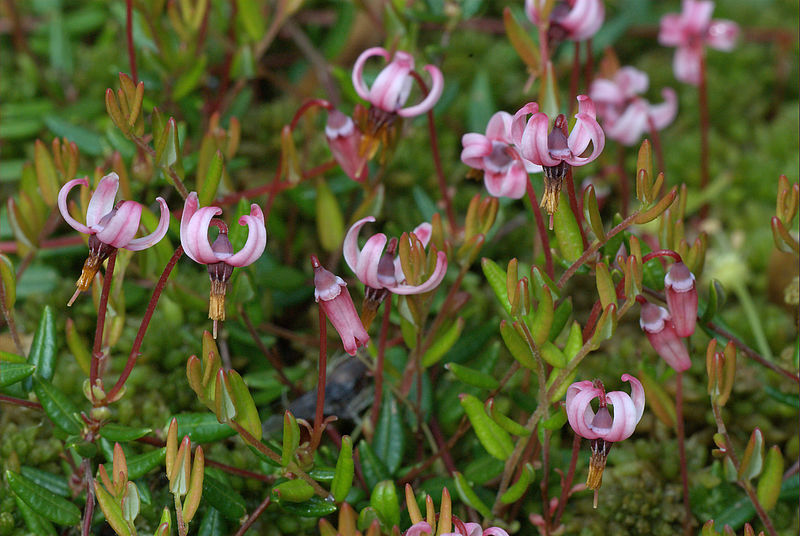 The preferred locations for the cranberries are raised or intermediate bogs, broken pine forests and spruce bog forests. But it also occurs in raised bogs in the lowlands, mostly in loose stands.

In Germany the cranberries are considered endangered.